Peter Barclay's Memoirs of an Aeromodeller

In 1948, my classmate, Colin Borthwick and I had heard about this new Control Line flying at Balmoral oval, right opposite the beach and naval depot. Colin later became a leading light in the Queensland “Vintagencia”, flying R/C assist old time free flighters, before sadly dying of kidney failure in about 1996.

Anyway, we waited and waited at the oval, until along came two people carrying control-line models- PETER SANDFORD and JIM FOX. Peter, who still lives in Balmoral at 86 years of age, had a model with an ED 2cc pennyslot diesel and meccano wheels, and he flew continuously that day. I was sold and returned the next weekend to Balmoral Beach oval. This time, along came two adults, Clive Wheatley MAA No. 8 and Ted Ryan.

CLIVE WHEATLEY was an ex RAAF DC-3 pilot in Europe and he had a metallic blue streamlined, tapered wing model called the Vultare, and an ex- army BSA motorbike. His effect on we youngsters was immediate, for not only was he a beautiful builder (like many others, a pre-WW2 rubber builder) but he treated us as ADULTS! Back in 1948, this was a radical way to treat us, instead of the expected “Don’t touch my model, boy”. He actually asked you to hold his model, which had the first real glo-plug engine I had ever seen, a McCoy Sportsman 36, which he subsequently left to me on his deathbed , along with a DeBolt Super Bipe and Atwood Triumph.

Well, the power and noise of this motor, and the speed of the model, flying on cord lines- there were no steel lines available then- just amazed me. We were all used to the English Mills 1.3 and ED 2cc diesels, which not only cost about two weeks’ adult wages, but you also had to put your name down and wait for up to a year!

Don’t forget, with the shortages of everything after the war, and no dollars available, many people after marrying, lived in their parents’ garage. But, you could fly a model on any public park or schoolground, and a model with a good coat of bike enamel, brushed on, was considered to be the equal of what we have as F2B today. Life was simpler and safer.

TED RYAN, Clive’s friend was also ex WW2 and made a living building scale models for companies or wealthy folk. His WW1 scale PFALZ bi-plane was the talk of the enthusiasts, who called him “small detail Ryan”. He used air brushes when everyone else used a paintbrush, and his sudden passing at 49 years of age resulted in a full page obituary in the local modelling magazine. Sadly, a house fire at his home destroyed all his models. I regret, when visiting his widow, not asking if I might buy the PFALZ.

The North Shore flying club was moved to Primrose Park around about 1949.This was a beautiful park in Neutral Bay, and opened onto the Middle Harbour. Clive Wheatley, as the leading senior member, held the Club meetings at his unit in Mosman Bay, where jazz records would be played on the wind-up acoustic gramophone. Being a teenager among the adults really made you feel grown-up, especially as you were treated as an adult by Clive. He built his models on a board across his chest of drawers, in the smaller bedroom, with only enough space for a bed and one person, as was the accommodation of the time.

Another adult who came from the Eastern Suburbs, was a gentleman named WALLY JUDD. He was a senior employee of one of the major oil companies, and on his frequent boat trips to the USA, he would manage to bring back model engines for the senior modellers. The banks did not give access to American dollars at that time, and some modellers would even go to Kings Cross and pay seamen up to four times the official value, just to get an American McCoy or K&B engine. Wally Judd would have, in the model flying area, FIVE Lil Duper ZILCH stunters, all made with a bandsaw. This was an incredible luxury, as few even had a hand drill and many, including myself, used to drill the engine mounts with a piece of red-hot wire, repeatedly reheated on the gas stove.

The ZILCH design of stunters had much the same influence on Australian modellers of the late 1940’s as the NOBLER design had 25 years later. Everyone, from NEIL COTTEE, the heir to the jam factory, to MONTY “ZILCH” TYRELL, the top Victorian stunt flier, built them.

Sadly, young JIM SAFTIG, their designer, was to die of burns in a light plane crash in 1957. 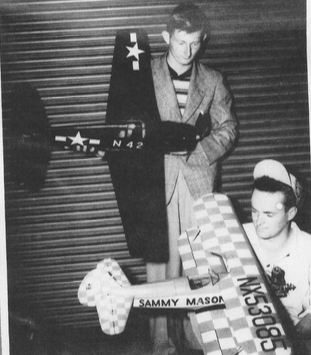 The top stunt flier in New South Wales in the late 40’s was MAX CUMMINGS. Max was a wonderful flier and builder, who, as a teenager, seemed to have access to the latest American McCoy and ETA engines, which could be heard screaming from the gates of Centennial Park, right down to the flying area. Max was only beaten in the 1951 National Stunt Championships by half a point by Monty Tyrell. No-one seems to know if he is still with us at 83-86 years of age as he would be now, but he left his mark on many of us who tried with success to copy his skilful flying, some of which was still on cord fishing line!

Max was last seen, and photographed, by Dennis Percival in 1985, holding Dennis’ reproduction of the Pirate, a Max Cummings’ design.

The main flying venue for control line in the 1940’s until the 70’s was Centennial Park. The flying area was roped off and the public would often stand up to two deep just to watch. When the Tarzan’s Grip glue failed on Neil Cottee’s Zilch, I saw the Super Cyclone motor, tank and flight batteries go spearing through the air, into the crowd, who broke into a cheer. The area was presided over by J.B. SCOTT, fondly known as Scotty, who continuously gave a commentary over a public-address system, even instructing modellers who were flying to “ground that plane”. As Scotty was not himself a flier, he was usually ignored!

Today, the area is deserted, haunted by the ghosts of fliers from the past.

In 1948 and 1949, the two main hobby shops in Sydney were Model Aircraft in Bond Street, and K-DEE, later to be called HOBBYCO, in lower George Street. Model Aircraft was on the second floor, reached by a water-powered lift, which swayed gently to and fro as it slowly ascended. There was no showcase, and if you wanted a Miels/.3 diesel, for which they were the agents, you simply put your name on a list and waited many, many months for delivery.

K-DEE, in sharp contrast, had showcases, and beautiful scale rubber-powered models of 50” span, hanging from the ceiling. They were American Megow kits, beautiful, but at five shillings each, they were beyond the reach of many folk. K-DEE always charged top dollar, as this continued as Hobbyco.

I could never build as well as I wished as a youngster and I gave up the hobby in 1951 to commence my studies. Around about 1962, I searched for, and found Clive Wheatley, living in a fibro ex-serviceman’s house at

Asquith, and our renewed friendship was now as adult to adult. When he passed away from cancer in 1964, I lost a real friend. Sadly, smoking took the lives of many of the older modellers, a number of whom were WW2 survivors.

Another of the great names in Control Line back in the 40’s and 50’s was a fellow called JACK FINERAN. He was the unbeaten champion in Speed flying, both at State and National level. Jack would arrive at Centennial Park, immaculately dressed in spotless white overalls and hat. The model was of the same ilk. The activities there would all stop while he straight away started the Cranby McCoy, and later Dooling speed motors, and the flight would be made….perfectly. Years later, about 1992, I and a fellow member of REMAC went to his house in Kensington, to interview him. He was still the quiet, gracious person of years ago, and we learnt that he had been one of the first to fly a powered free-flight model in NSW. Jack still had his speed motors, and he gave a fellow member all his notes and data on his speed models. Unfortunately, however, on the recipient giving up the hobby and moving to Queensland, it appears that this historical evidence of a lifetime in Speed flying may have been lost. I believe that Jack Fineran passed away some time in the 90’s.

In those early times and despite military and often turbulent backgrounds, I never heard bad language from the adults of this period, nor did my young eyes ever see any prima donna behaviour or one-upmanship. The adults all had our respect, everyone was there to have fun. Life was so much simpler in those days.