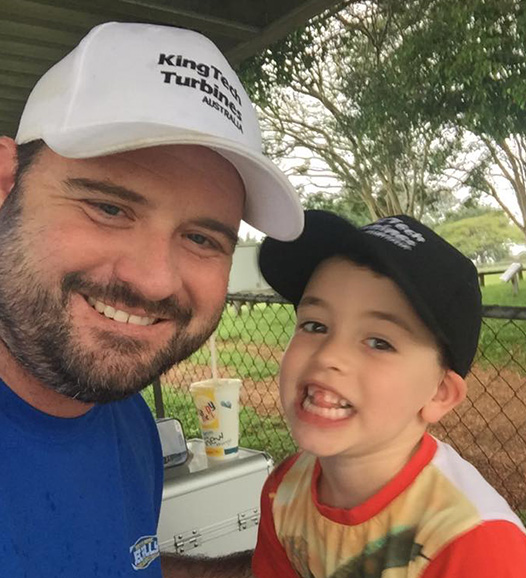 New MAAA assistant secretary, Tyson Dodd, says that he first began flying when his father, (former MAAA secretary Kevin Dodd) handed him a model aeroplane transmitter when he was seven years old. His passion for aeromodelling has thrived ever since that pivotal moment.

“It’s about that unique sense of being in complete control, it’s the freedom and feel of flight. It’s also about the skill, the achievement and the challenge and about being part of a club and flying with your mates…it’s the camaraderie.”

It’s a passion that now spans three generations of the Dodd family, with Tyson, like his father, similarly passing on his aeromodelling enthusiasm to his own children.

“He got me into it and I now have a seven year old son and a five year old daughter who are both having a play with electric planes,” Tyson continues.

“My Dad, my son and myself regularly go away together for a scale or a jet weekend event. It very much validates the family friendly aspect of the sport.”

The next generation of aeromodellers

Tyson brings many devoted aeromodelling years to the role of MAAA secretary. Since 2011, he has been uniquely exposed to the way that the club, state and federal body operate through his involvement as part of the Model Aeronautical Association of Queensland (MAAQ). He was vice president of the MAAQ for one year and then consequently became president, a role he held for three years, notably becoming the youngest president of a state committee.

“Obviously my passion for aeromodelling is fairly high and because of my age I probably have a slightly different view on the future direction of aeromodelling,” considers Tyson in relation to what he feels he will bring to the role.

“My desire to ensure that the MAAA and aeromodelling in Australia is preserved is very high. I certainly enjoy getting around to the aeromodelling events and celebrating achievements with other aeromodellers.”

Tyson’s professional experience as an environmental engineer has certainly assisted in the MAAA’s land purchasing procedures, which has enabled existing future aeromodelling clubs to continue to establish themselves.

In addition, through his annual travels overseas to the US to compete or participate in events such as the world renowned Top Gun, Tyson has also built unique relations with the AMA, (Academy of Model Aeronautics) and other pivotal organisations that promote aeromodelling at the grass-roots level.

“I think this will certainly help me provide additional knowledge to clubs and states that want to hold major public events and to really inspire the younger generation to get involved and be hands on in our sport,” continues Tyson enthusiastically.

“I still fly together with one of the kids that I began flying with all those years ago. We laugh about how, in 15 years’ time, we will be sitting back watching our kids fly together too.”